Skip to Content
By continuing to use this site, you agree to the use of cookies. Find out more
Home Blog Race Reports IRONMAN Maryland . . . Five Years in the Making

Since 2016, I have been working my way back to the IRONMAN start line.   There is just something about this distance that has my heart in so many ways.  There were so many ups and down, at points I felt like 10 steps backward before 1 step forward, it was in many ways surreal to be back. 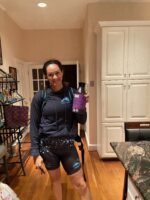 The Swim:  One word – Jellyfish!  I knew that this might be an issue with the heat of the summer and they were so prevalent at camp.   I had hope that the time between when we were in Cambridge, Maryland in August and race time they would swim elsewhere.   But alas, they seemed to want to hang out in the tropical Choptank Waters.   The day before the race, we went to do a practice swim.  I had never been stung before and I wanted to make sure: 1) I was not allergic; and  2) prepare myself for what a jelly fish sting actually felt like.   Since the water was trending above the legal wetsuit limit, we put our swim skins on and off we went. 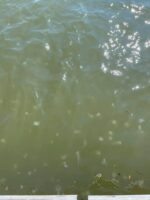 Truthfully, the anticipation of getting stung is way way worse than the actual event.   Everyone at the race reported different reactions, but I felt like it was like razor burn or getting salt in a cut.   It was not terrible, it just made you want to get out of the water FASTER.   Friday afternoon, Ironman sent out an email stating that due to the prevalence of jellyfish they were going to allow us to wear wetsuits as long as the water temp did not get above 78.   So I planned to wear my sleeveless BlueSeventy Reaction. 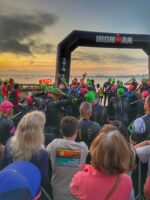 I knew I was at risk of overheating on the swim.  The warm water and increased effort could lead to a challenging day.   So I dialed back the effort and made sure that I was way over hydrated going into the swim.  I had an extra bottle of water, Skratch, and a banana before hitting the start line.   Overall, the swim was uneventful as it could be with 1,000 of your best jelly friends.   I seeded myself about 30 people from the front, secretly hoping that they would clear a nice path of less jellyfish to swim through (NOTE that did not work at ALL).  As we hit the turn to start the second loop, they were still getting athletes into the water.   I made the decision to hug the inside the yellow buoys to avoid as much congestion as I could and then go outside and around the red.   Overall, I felt like that helped with some cleaner water, as we headed into the finish there were SO MANY jellyfish, with the water being shallow and warmer.

The bike course is fast and flat, with roads that are in pretty good condition.   There is an out and back and then two longer loops.   I took 4 bottles of Skratch on my bike and planned to stop at special needs to replenish for the second half.   We had some wind, but it was light.  It did pick up over the course of the day.   I knew it was going to be warm so I planned on picking up water at each aid station to keep cool 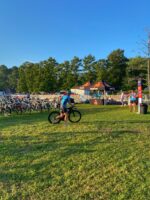 I bought sport bottles to toss for the race.  Each time there was an aid station, I tossed the empty bottle and picked up water.   I also used honey stinger chews and base salt for fueling.   Overall the course is one that you just sit in aero and pedal for 112 miles.

The Maryland run is 3 loops of 8 miles and then head to the finish. I knew this would be the biggest struggle since I have been managing a sciatic/hamstring issue and I just did not have the run fitness to execute a good run.  First and foremost, I wanted to go back to the distance of IRONMAN so I was happy to get back to the distance.  It was not the day I wanted on the run, but I knew that this was likely to happen.   I liked the way the run course was broken up; the crowd support was great and the people were AWESOME! 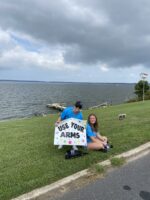 By far the best support was the crew that I had on course all day!  The Sonic crew was all over the course volunteering and cheering.