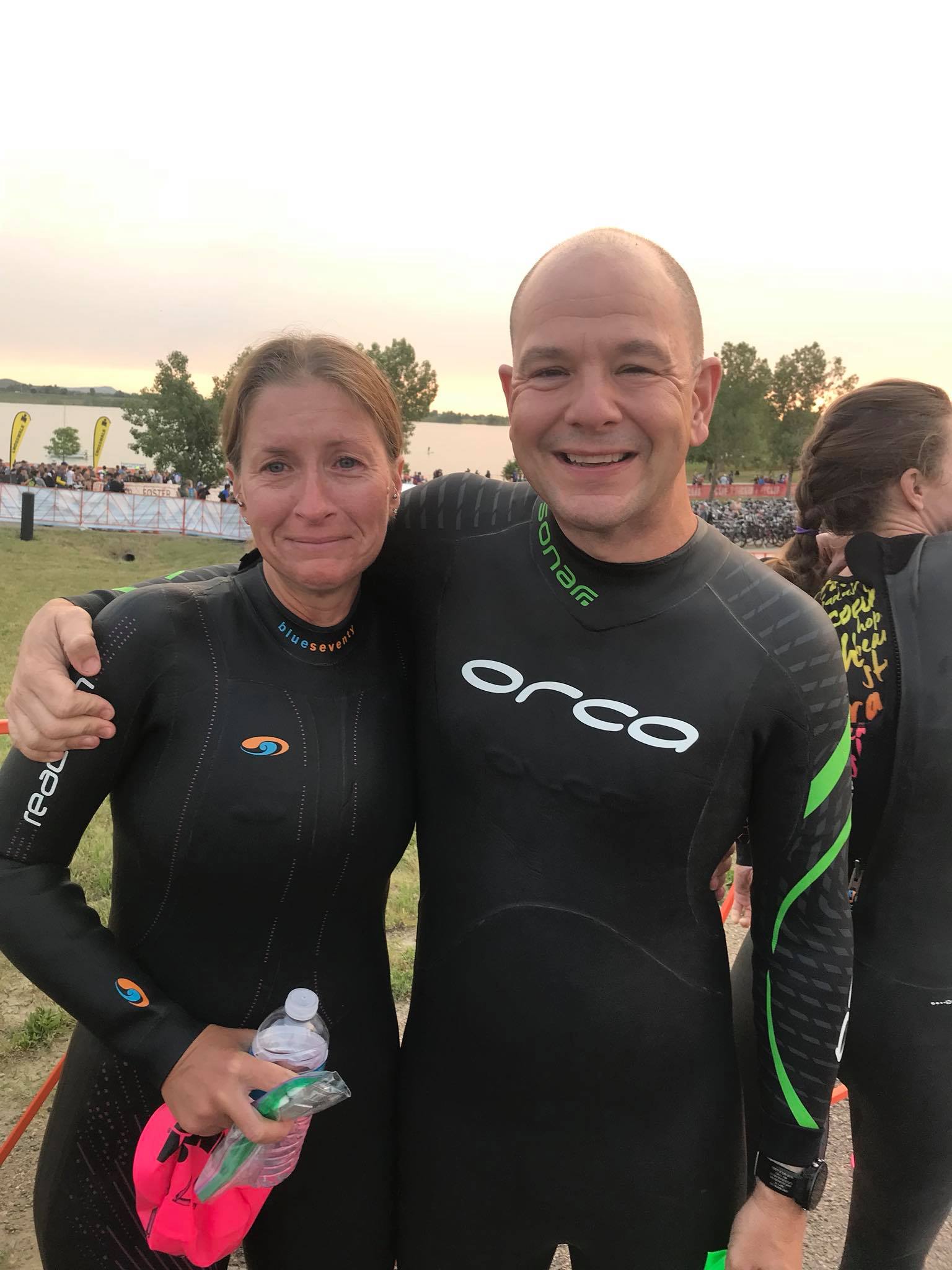 I signed up for Ironman Boulder a year ago after watching my friend do the race.  I loved the controlled swim, almost guaranteed to be wetsuit legal, the beautiful bike course, the lovely shaded run course and the cool weather.  Plus Boulder was a much smaller, less competitive race than Texas and I would have an excellent chance of making the podium. Last summer we traveled to Canada for most of the summer so I didn’t do much swimming or biking but the plan was to get back in the pool and back on the bike in August when the kids went back to school…and that’s what I did for one week.  Then Hurricane Harvey came and pretty much wrecked everything. I didn’t swim or bike for months, I rebuilt my flooded house instead. I did train for a marathon and completed that successfully in January but it was basically February before I was back in the pool. I had about 4.5 months to get ready for my Ironman.

I started to swim, a lot.  Built my yardage up to over 10, 000 yards a week quickly.  Got back on the bike and built mileage there too. Things were going ok, and then I hurt myself pumping up my bike tires on my birthday in February.  Dumb right? Stupid little movement and I tore a muscle in my rib cage. That meant no swimming and no running for about 2 weeks. Strike one. The injury healed and then I came down with a nasty sinus infection, I muddled my way through my workouts but it took about 2 weeks to heal up from that too. Strike two.

Now it’s April.  I did the Galveston 70.3 relay bike one weekend, spectated at Ironman Texas another weekend, both events I wouldn’t have changed or missed for anything but there went a couple more opportunities for quality training time on the bike and the long ride.  In early May I took a run coaching course which meant another lost weekend.

3 weeks out from IM Boulder was to be our final long ride, 120 miles, a confidence builder before starting taper.  It was also the weekend of the Texas State Time Trial that I was racing. I woke up race morning not feeling great and just chalked it up to race nerves.  Did the time trial, performed well but that afternoon I started running a low grade fever. Set out for the final long ride the next day and it was quite frankly a disaster.  I had planned the route, on roads we had never been, and the majority of them were under construction. We rode about 40 miles on unpaved roads. It was exhausting. One of my ride partners got a flat and was just done with the whole business so we planned to get her back to the cars and then carry on.  Well, we got back and my other ride partner was exhausted and I just felt like crap. We called it quits. That night I was running a fever and ended up with a fever for the next week and getting bronchitis. Strike 3.

Now it’s time to head to Colorado.  I had planned to go up a week early to acclimate to the elevation and get some workouts in on the course.  I left with a heavy heart. Things changed for me after the flood. I used to love travelling for races and seeing new places and doing new things.  Since the flood I just want to stay home with my babies and be safe. I struggled through this training cycle with a lot of fear on my bike that I never had before.  I was terrified every ride of being hit by a car, or crashing my bike going fast down a hill and getting taken out by a strong crosswind. I almost turned around and went home a couple times on the 15 hour drive there.  I missed my family terribly. But on the ride up I listened to a book, about how a positive mind relates to successful racing. And I did my best to set my mind to embrace the experience and be thankful for it and to do my very best.  I set my mantras “Be brave and be thankful”.

After arriving I did several runs, bikes on the course, and open water swims.  It all went great. My friends and training partner from Katy arrived and so I didn’t feel so homesick.  We did all the pre race things, check in, athlete dinner, bike and bag check and I felt more ready and confident every day.  We checked out the finisher gear at the expo and I picked out a cute tank top I was going to buy the day after the race. The checkout clerk made a comment to the effect of “make sure you finish” and I was like “duh, of course, why wouldn’t I?”

Race morning I was nervous but probably more calm than I have ever been at a triathlon.  I always fear the swim so much and just want to get through it. Not this time. I was ready for that swim.  It was wetsuit legal which helps but I felt confident in swimming the distance because I had done it so many times.  On my way down the chute I hugged Mike Reilly and said “see you later today” and he said “aww, you’re gonna make me cry”

I walked right in the water and got to swimming.  I felt 100% in control the entire swim. Not a moment of panic.  I was even passing people in the water! I had a few issues sighting the buoys because of the reflection of the sun on the water but I think I swam pretty straight.  It’s a long way to swim but there came the end, I was strong to the finish. I got out of the water and looked at my watch, 1:22. I laughed to myself. My friend Liz had swam a 1:22 last year in Boulder in that exact same wetsuit, and had had a 17 minute PR on the swim, same as me.  Her swim had earned the wetsuit the nickname of “Jenny’s Magic wetsuit” who we had both borrowed it from.

I booked it through T1, got on my bike and headed out.  Thinking, what a beautiful day to ride a bike. The first 30 miles were great.  My pace was awesome, I felt good. And then someone turned on the hair dryer. It got really hot, and really windy.  I was running out of fluids quickly, I would take 2 bottles at an aid station and be out before I hit the next one 10 miles later.  My lips were cracking, my eyes were blurry because my contacts were stuck to my eyeballs and there was no moisture in my eyes. I would dump water on myself and be dry in 2 minutes.  The end of loop one was a long 12 mile stretch into the wind with no aid station. I started having this weird feeling of wanting to take a nap. Who wants to take a nap during a race?!  Headed out on loop 2 and there was a twinge in my right leg, right above the knee. I noticed my power had dropped off, focused on pushing a little harder and that twinge got a little more pronounced. Backed off, well now I’m only pushing 100 watts and barely moving.  But every time I tried to pick it up that pain in my leg increased. It was now very noticeable and I felt it with every pedal stroke. Tried to use my left leg more dominantly. I hit the aid station at mile 70 and got off my bike. Asked if they had medical there (not sure what medical could have done?  Give me an advil? They’re probably not allowed to do that) there was no medical. I sat down for a minute beside a guy who was also having a bad day and the volunteers (bless their hearts) assumed I was over heated and piled cold cloths and ice on me. I kept saying, “I’m not hot” because I wasn’t. I was instantly freezing when they put all that stuff on.  I spent a few minutes massaging my leg and told myself get back on your bike, you are not quitting! Just get up the hill. I still had the 3 big climbs left to go. Got back on my bike, hoping the little break would have fixed things but it was worse not better. I almost cried going up the climb it hurt so much. There was no way to one leg pedal it up, these are stand in your granny gears to get up the hill kind of climbs or get off your bike and push it up.

It was all downhill to the next aid station I decided to just try and get there.  And I debated what to do. I was looking at 30+ miles to go, probably having to push my bike up the hills and then that long headwind stretch back.  It was going to take me 2+ hours to finish the bike and then what shape would my leg be in? It continued to hurt more and more. Would I even be able to run after?  Would I even be able to walk?? I was looking at over 8 hours to get to the finish line. In that moment, I chose not to suffer for the next 8 hours, but chose self preservation instead.  Just stop and live to ride and run another day.

Since then I have thought about that moment repeatedly.  Did I make the right decision? Would I do it differently if I had another chance?  Is that what it means to be an Ironman? To suffer no matter the cost? And I saw plenty of suffering later that day, we went out on the run course and I saw people push through incredible amounts of pain to make it to that finish line.  Does it say something about me that I wasn’t able to do that? Maybe it does. I do feel that I went into this race mentally unprepared. I think we all have a resiliency bucket and after all the events of the last year, mine was empty. I read an article recently how Ironman appeals to people with comfortable lives, it’s a way of forcing ourselves to suffer and do hard things in our otherwise “easy” lives. I was exhausted from just living over the last year, I didn’t need to make anything harder.  Perhaps if any one of the factors of the day had been different there would have been a different outcome. If it had been windy but not hot, or hot and windy but a pain free ride, or having the pain but perfect weather….I don’t know. The combo of everything, the events of the day, the training leading up to the day, in that moment I was physically and mentally defeated. In the end the choice was made and can’t be unmade. As disappointing and difficult as that was I know that triathlon does not define me.  It’s what I do, not who I am. My kids could care less that I didn’t finish a race. My friends don’t think less of me. My parents still love me. There will be other races, this isn’t the end.

One Reply to “The Anatomy of a DNF – by Coach Jen”