Skip to Content
By continuing to use this site, you agree to the use of cookies. Find out more
Home Blog Athlete Stories Year of COVID-19 (Guest Post by Christine Rowe)

2020 was a big year for Christine Rowe, she was turning 50, training for the Boston Marathon and raising funds for the National Organization for Rare Disorders (so far she’s raised over $6,000).  Then the world shut down due to COVID-19.  Instead of giving up, Christine continued to train and to be a tireless advocate for her children and her mother.  Here’s her story:

So where do I begin? 2020 was supposed to be MY YEAR! I turned 50, was signed up to run the Boston Marathon and complete my first Half Ironman. All I wanted was to get to run Boston and that would have been my last marathon (yes I know I say that, but really I meant it!). I raised a ton of money for The National Organization for Rare Disorders for the Boston Marathon, trained through a mild winter and was feeling fantastic! Then this ugly thing COVID happened.

I held out hope that Boston would happen and that Eagleman would happen but knew deep down that they probably wouldn’t. So what do you do? Do you continue to train? Do you give it your all? Do you rest? Maybe…all of the above?

I am a goal oriented person and need to have some type of structure to my life. I saw the world crashing around me.

Not only was I dealing with COVID but life was spiraling out of control …my two teenage kids were home with nothing to do, my son’s prom was cancelled, sports were cancelled, my mom was locked in a nursing home with alzheimers and I couldn’t see her, we bought a farm house built in the 1800’s and we were restoring it, I spend most of my days on zoom calls sometimes from 7 am to 6 pm, my son needed surgery and he has a severe bleeding disorder, my dad threatened to commit suicide because he was so depressed. I guess the bigger question was when do I admit myself to a mental hospital?

I had to keep my head on straight, I continued my training that included running, biking, cross training and swimming (as soon as the pool opened). Training was my outlet, after all I was training for LIFE. Who could deal with all of the things I was dealing with and not have some type of positive outlet. I will admit, there were days I definitely “overtrained” but managed to think it through and listen to my body when it yelled at me to REST! Coach Stacey will tell you that REST is something I struggle with most of all.

No matter what happens in life, you need to keep things in perspective. I was super disappointed that I wasn’t going to have all my goals reached in 2020. But then I thought about how much worse it could be. I think of my mom locked away with no family interaction, I think of people who are dying and sick and have no hope for a cure, I think of those who lost their jobs and worry about how to put food on the table – life isn’t so bad after all! Yeah, it sucks now, but no doubt there will be another time for me to reach those goals that I wont ever stop chasing! 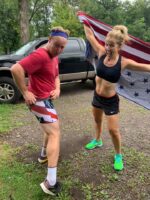