Skip to Content
By continuing to use this site, you agree to the use of cookies. Find out more
Home Blog Biking Skratch’s SuperFuel LemonLime Drink Mix Review

Over my decade in triathlon, I’ve used just about every drink mix known to man. I’ve gone from Hammer’s HEED to Skratch’s regular mix to First Endurance EFS to slurry bottles of my own design and everything in between. I’ve never really gotten it *quite* right — whether as a factor of choosing the wrong drink mix for myself or by messing up my pacing so that I can’t actually digest the fluid or food I’m ingesting. (My athletes: do as I say, not as I do.)

After my DNF at IRONMAN Lake Placid last year in T2, having lost over 10 pounds despite drinking 10 bottles of fluid on the bike and with kidney function levels hovering around the (and pardon the language) “you’re in deep shit, buddy,” I finally took the time to really attempt to figure things out. What we uncovered: first, I have a thermal regulation problem that ties back to my TBI from 2014 that we’ve addressed, and second, I sweat a lot. As in, “5 lbs of fluid in a one hour bike at 70.3 effort at 70 degrees with plenty of wind.” So using Gatorade Endurance, I’d need a minimum of two full bottles per hour — which works out to roughly 360-400 calories per hour.

That said, sometimes you struggle to drink that much. Or you want to separate your hydration needs from your caloric needs a bit. And that’s where Skratch’s SuperFuel Drink Mix comes in: it’s a longer chain carbohydrate they call Cluster Dextrin, which when properly mixed, gives you a 400 calorie bottle to work with. It’s specifically made for when you can’t chew, or carry real food (which Skratch espouses). And it’s very different from their normal mix, which usually uses cane sugar as the carbohydrate source. 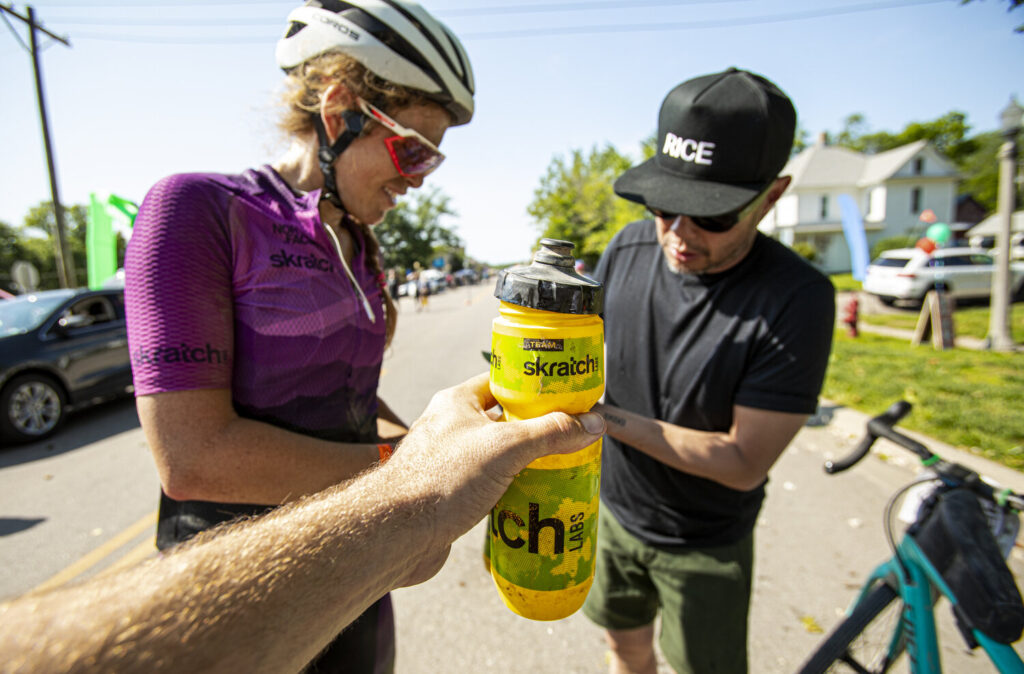 I tested the SuperFuel Drink Mix as part of my fueling strategy for the Tour de Virtuel, especially on my weekend longer rides where I was clipping off 50+ miles. As you might expect with something that isn’t sweetened using a so-called simple sugar, the flavor of the LemonLime mix is not nearly as sweet as some other drink mixes on the market. And whether it was placebo, or the science behind Cluster Dextrin, I definitely felt like the release of energy was steadier across the ride.

The biggest issue I found, though, was that it is woefully lacking in electrolyte. There’s only a touch of sodium in the mix. Even regular Skratch has sodium, potassium, and calcium in it. I cramped up each and every time I used the product, in contrast to whenever I fueled using Gatorade Endurance. I am curious as to whether it would work better if I had also mixed in a packet of Gatorlytes into the mix in order to boost the electrolyte content. And I would also wonder as to how the mix would work if I stepped up to using a full 40+ ounces of fluid per hour, as based on my sweat rate. Could I do a bottle of SuperFuel and a full bottle of water and not dramatically impact absorption? That’s a question still unanswered, which I’ll need to test further on some warm days this fall.

In summary: if you’re not a heavy sweater or cramper, I think this is a winner to add to your fueling options. But I’m still left wondering about other options. For now, it’s back to lots of Gatorade Endurance (always cold!) and snacks as needed.