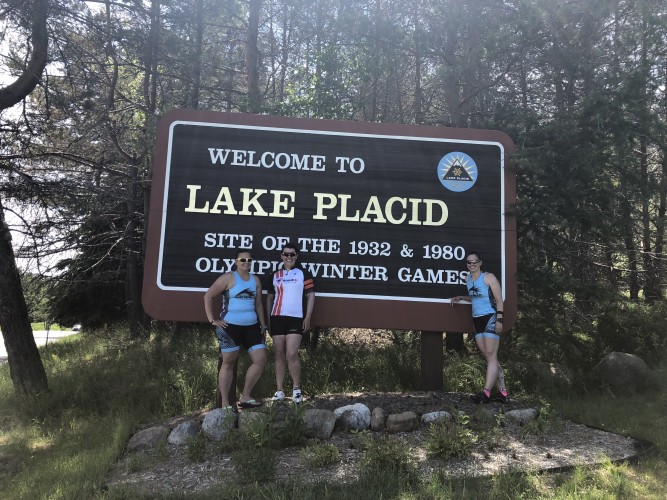 Our 2018 Lake Placid Training Camp wrapped up last weekend, and we’re already looking forward to seeing a bunch of athletes ready to work hard and play hard next year. Although Lake Placid dished out everything it could weather-wise, we had an extremely successful camp. Here’s what happened:

Thursday was technically our optional arrival day, with camp not officially starting until late in the afternoon on Friday. We travelled from Keene with two athletes in tow. Our route took us through gorgeous backroads in Vermont, sparking the idea for a potential Keene, NY to Keene, NH running relay event. We arrived to find a large contingent from Pennsylvania already at our headquarters for the weekend, including Coach Stacey. As our tagline is #workhardplayhard, the PA crew rolled out for fire making materials and adult beverages while we set ourselves up in our rooms. We then progressed over to Lisa G’s, as a weekend at Lake Placid is not complete without one meal there. Following some discussion around the fire, we all hit the hay in preparation for Friday.

Friday was originally supposed to be a completely optional day of training. However, Lake Placid decided to throw a wrench into our plans, as a soaking weather system was scheduled to roll through Saturday morning through the remainder of the weekend. Given that, the early arrivals wanted to go out with the sun out. We headed down to Mirror Lake to enjoy a swim in the rapidly warming waters. Water temperature last weekend was in the low 70s; given the current heat wave in the northeast, it is entirely plausible we’ll have another wetsuit optional swim in a few weeks.

One of the big things we sought to do all weekend long was to give athlete’s options on what they wanted to do; after all, it’s really their camp. With that in mind, some athletes swam a full loop of the swim course. Others got about 750 to 1000 in before heading back in. We all then prepped ourselves for a warm day out on the bike. Again, it was all about options — Stacey and Ryan headed out with a group looking for either one or two full loops of the bike. Kelly, meanwhile, took athletes committed to #TeamHillNo to the flats of Upper Jay for some laps on there. This also provided an opportunity to park our sag vehicle, stocked to the brim with everything an endurance athlete could desire for food or drink, in a convenient spot about halfway through the loop.

As the group on their loop headed back out for more punishment, Kelly and the #HillNo brigade turned the parked sag vehicle into a roaming fuel stop. One of the best locations was at the top of the Bears – it avoided the congestion of downtown and let people get fuel in after the 15 mile trip from Wilmington. Ryan headed back to the house to begin the evening’s cooking, Stacey greeted our Friday arrivals, and Kelly continued manning the roaming aid station. We managed to get everyone back into town safely with athletes having ridden anywhere from 25 to 110+ miles. Ryan threw a bunch of vegetables and protein onto the grill and smoker, there were many things thrown into the fire, beer was consumed, and there was much rejoicing.

Saturday dawned gray and cool. Kelly and Stacey took a group down to Mirror Lake for another swim. Ryan stayed behind to work on his bike, which had given him some trouble the day before. Again, athlete’s were given options on distance based on what they felt like they needed to do on that particular day. After about 45 minutes at the beach, the crew rallied back to the house to begin preparation for another day’s worth of riding.

Saturday was originally scheduled as the long bike day of the weekend. As some athlete’s had done that on Friday, we had a few distinct groups on hand for Saturday’s ride: #TeamHillNo, athlete’s recovering from Friday, those who still needed a long ride, and coaches. Stacey and Ryan went out with the main group looking to ride at least one loop, whereas Kelly took #TeamHillNo back to the flats for riding and supplying the rolling aid station. We also had another roaming sag vehicle in the case of mechanical breakdown.

There were many mechanical breakdowns.

Within the first ten miles of the bike, two bikes had to head to Placid Planet for emergency repair (brakes are generally a good thing to have before attempting the Keene descent). Ryan continued the ride with the remainder of the group, which saw another bike breakdown following the Haselton Road out-and-back. One of the two bikes that had gotten repaired at Placid Planet suffered the same mechanical fate not 20 minutes after repair. Cool rain and sand on the roads are a cruel combination.

Given the conditions, we sent our athletes in need of more than 56 miles on the day back down the Bears to perform loops along River Road instead; this kept them closer to home in the event of more severe weather conditions as well as easier to support in the event of a breakdown. Athletes remained in high spirits despite the crummy weather and the crummier mechanical luck. In all, everyone kept the rubber side down and everyone managed to smile through the day. After a brief disaster during dinner prep, we recovered nicely with a whole lot of food, plenty of beer and wine, and more things to throw onto a fire. More rejoicing!

It was Sunday Runday! We awoke to discover that the humidity had done a number on our bagels, turning them into science experiments. Kelly, thinking on her feet, made everyone pancakes. Between that and coffee, spirits turned themselves around. The same, however, could not be said for the weather: gray, touch of cold wind, but still humid enough to make overheating a distinct possibility. It was near impossible to choose the right clothing for the day.

We packed up the house (check out time was early), and headed out for the run. Options for the day were to run around Mirror Lake, or to head out on the run course for some miles on River Road. We were split roughly 50-50 on the run options, so Kelly and Ryan took a mobile aid station out to River Road while Stacey stayed with the Mirror Lake folks. Runs were tailored to everyone’s needs, with the longest run being 14 miles.

We all met back up at the Lake Placid boathouse to get one last look at Mirror Lake before race weekend and to shower. With that, it was time to drive back home and get ready for the big weekend, now just a little under three weeks away.