Skip to Content
By continuing to use this site, you agree to the use of cookies. Find out more
Home Blog Athlete Stories Injured? Or Just Over 50? Guest Post By Ginny Ebben

The last few years have been the equivalent to an athlete’s soul searching. I’m 52, tipping mightily towards 53. Growing up in the 70s and 80s I was a proud “Tom Boy” because of my love for my Wranglers, my striped tube socks, my boyfriends who were the jocks of the class, my ability to kick that red, rubber kickball as far as anybody, and my love for being on the field, part of a team, no matter if they were all boys because there wasn’t a girls’ team (remember 1970s, early 80s). Running was something I started doing at the age of ten.

My dad was an athlete, runner, and tennis player. I found his college journal the other day from 1945 – the last page is “It’s V-Day! The war is over!” And besides learning about his college sweethearts, I also learned he was an accomplished hurdler, college swimmer, and marksman. It explained so much of who he was and who I was and am and still strive to become. He wrote down how many push-ups, sit-ups he did everyday. His little page-a-day calendar was his Training Peaks. I learned that he came in second in the backstroke when the Fighting Illini swam head-to-head against the Badgers of Wisconsin. There are photos of him stretching and leaning as he gracefully clears a hurdle during an indoor track meet. No idea who he ran against. The image is fuzzy. I learned he won a major collegiate award for his skills with a rifle. In addition to having a “torrid” date with K.T. he made sure to get his workout in – they were simply called exercises or exercising back then. To be fair, most men were likely fighting overseas, so I’m not sure what the competition was like. For the record, my dad wanted to be in the air force or any part of the military where he could fly a plane. He was denied entrance due to poor eyesight and apparently flat feet. I have his draft cards that are marked. He always felt guilty that his friends fought and died and he stayed in Illinois. The point is, he clearly wanted to put in the work and do the thing – be it fight, hurdle, swim, shoot – all took different skills and muscle strengths. He wanted to play. He wanted to compete.  Writing it down held him accountable. It made it real. Made it last. 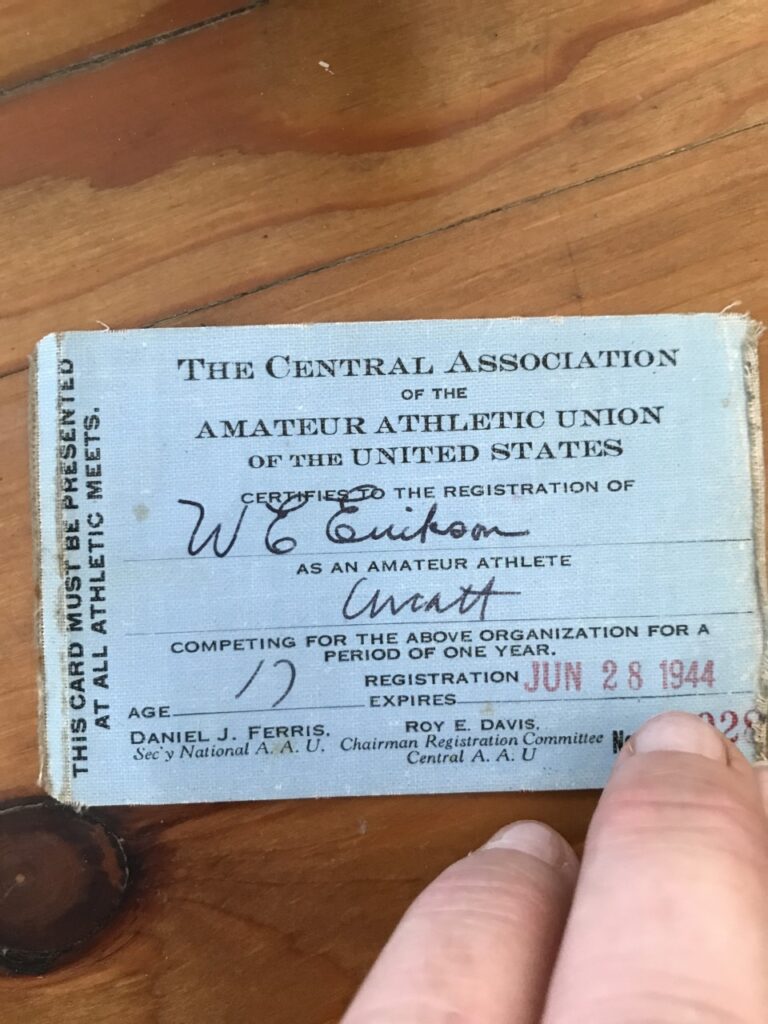 He was 42 when I was born. My first run for running’s sake took place when he would have been 52. I can picture him stretching on his bedroom floor, struggling to reach those size 13 feet. I see him icing a rolled ankle, heating a sore hamstring, resting his chin/head on a strap that latched over his closet door for what I now know is traction but at the time just seemed like an at-home suicidal hanging contraption.

My mother would lament all of his ailments. She liked to sit, play bridge or doubles tennis, or garden. But moving forward for long periods of time? That wasn’t her thing. Strenuous activities were too much work. Her mind was sharp and she could hit a tennis ball with such precision that even the fittest couldn’t reach it. But moving to the ball? That was her partner’s job. She was never injured. 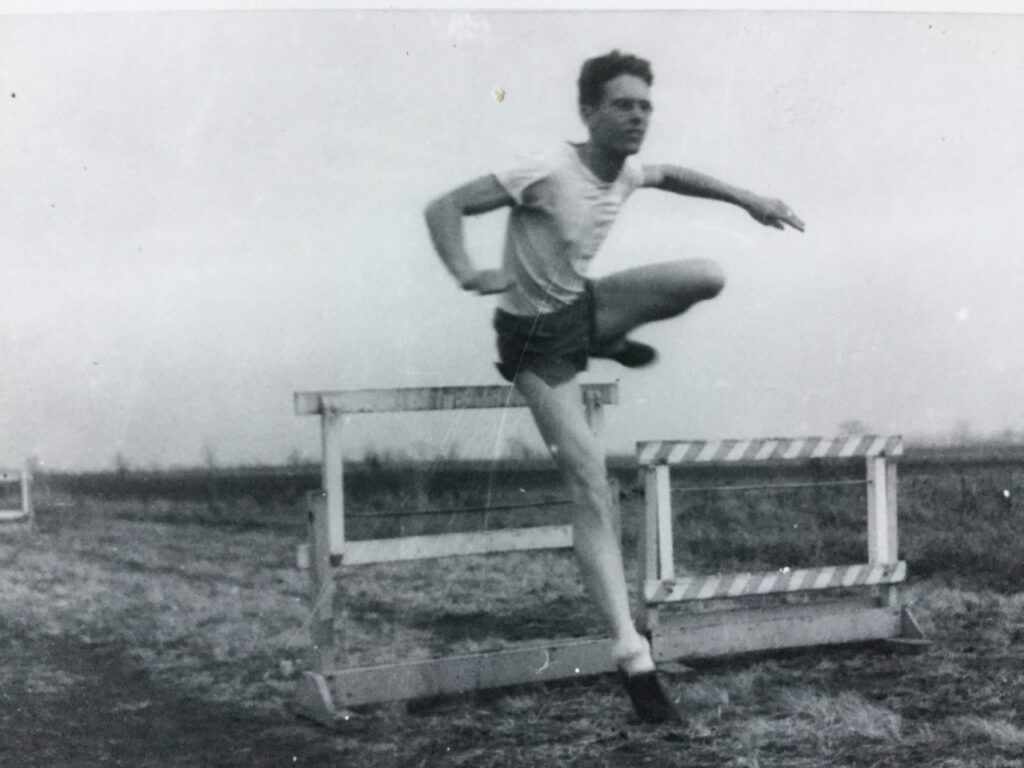 Lying on my back, on a massage table, in Takoma, MD, 25 years ago, my first entry into brutal “therapeutic” massage alerted me to potential issues. “Your back won’t last to 40 at this rate” the massage therapist snapped at me. I never went back to that awful, terrible woman who didn’t know how to give a massage and clearly didn’t know my Olympic days lay ahead. Flash forward 25 plus years and I am furtively seeking more terrible, no-good-massage therapists who are willing to go deep and reach into my soul and yank out the evil that lurks within. Biting down on my Invisalign that protects my teeth from cracking as I clench clench, relax, breathe, I know the muscle release I feel will help me stand a little taller, stride a little smoother.

Core exercises? Almost every day. Table top, one leg lifting and opposite arm lifting? No problem, Balanced. Strong. Yoga and stretching? Everyday though the yoga is really just sun salutations and three minute poses because man-oh-man does it make my hips and back move like a human instead of a Cro-Magnon (no offense to any CMs out there). Who hasn’t run through a tight hammy, feeling the tug with every stride, guessing how many steps it will take to get to that upcoming curb so you are sure it’s the “good” leg that lifts the foot to step up. I know you know what I’m talking about. Because everyone reading this is an athlete. You’ve all been injured. Felt the discomfort of moving through that pain. Finding the right way, angle, area to plant your foot so you don’t feel your plantar fascia, your ankle, your shin, your knee, as you push off and stride. I see you. I feel you. It’s what we do.

Until we are fifty. Or close to it. Then we start to crack. And suddenly pushing through isn’t working. And other areas are compromised – the back, behind the knee, the soleus, your rotator cuff, your piriformis, your ITband, your adductor. Reach in, pick a ticket, you’ll likely be predicting a future you never thought you had coming.

Pushing through discomfort is what we do as athletes. We know that mental strength is as important as physical strength – sometimes more so. Sitting on the physical therapist’s table as I awaited a needle to enter into the meat of my adductor (that’s the groin one, so, yeah), I kept telling myself this is the way to redemption. This is the way to getting back on track and on to the track. I’ve had two dry needling sessions. Finally went to the needle. You know you’re desperate when you allow a stranger close to your groin, with needles.

I’m gearing up to start training again. Not simply pandemic running when the sun is up. Taking steps to charge my light for those pre-dawn sessions. Getting up for the weekly Bagel Run at our local running store (shout out for Good Times Running Company). My pace has slowed substantially since last year when I felt like I was 40 again, training and hitting a half marathon PR. I’m feeling more like 60 these days. That’s OK. I’m here for the long haul. For the journey. Like Dory on land, “just keep (swimming) moving.”

My body flip flops from creepy pain and discomfort to fluid grace. More runs feel like they need to start with me holding on to a walker, slowly gathering speed and height, as my body, and I mean all of it, muscles, tendons, ligaments, bones, blood, veins, eyes, warm up. But I’m moving again. And I want to train again. I see the light at the end of the long, injured, tunnel.

So now instead of wondering “can I?” I wonder “what if?”

This article was written one year ago. Today, I am pain free and running like I did two years ago. But it’s taken two years to get here. And I had to change my habits. I rehab at least 5 times a week at home. I do my stiff-bodied yoga and find so much relief that I now crave it during the week. If you’re injured, recognize there is a path to recovery. Just like it took time (years, maybe) to get to where you were before you were injured, it will take time to get back to where you were when you got injured.  You will be moving again. Maybe you’ll move differently for a while. But you’ll be moving. Keep a journal. Notice what helps you feel better – for me it was yoga and a change in nutrition. What will it be for you?