Skip to Content
By continuing to use this site, you agree to the use of cookies. Find out more
Home Blog Race Reports My First, Last and Only 50K Trail Race: The Keeping It Real Report

Last fall I signed up for an ultra trail race.

Why?  Mostly because my friends were doing it.  In fact our team name for sign up was “That’s a horrible idea, What time?”  February 13, 2021 was the date.  This happened to coincide with a historic arctic blast headed for Texas.  The week leading up we watched the weather forecast get colder and colder, and I obsessed over what to wear and secretly hoped the race would be cancelled.  In true trail runner/racer fashion not only did they not cancel, they cleared their wait list and got more people to sign up.  The race takes place in Huntsville State Park which has a beautiful campground.  That was sold out up until a few days before the race.  Guess how many people actually camped?  The place was completely empty.  I counted about 10 RVs and apparently there was one site with a tent.  Bless their hearts.

Race morning was 28F/-2C at the start and we reached a high of 32F/0C for the day.  With the “feels like” temperatures much lower. There was also a nice crisp 10 mph breeze out of the north in case anyone got too hot. I ended up wearing running tights, thermal socks, trail shoes, long sleeve base layer top, a wind cycling jacket, buff for my face and ponytail hat.  I had also gotten some nice flip mitts which ended up being perfect, I could open them when my hands got hot and close them when I headed back into the wind.  Incredibly I saw people in shorts, t-shirts, and one woman in a jog bra, but with sleeves and tights.  Still can’t figure that combo out.

I had signed up for the 7 am start, and unbeknownst to me that was the “competitive” start.  Whatever, I wasn’t standing around for the non competitive start.  And competitive they were!  I started with about 10 people who were all immediately out of eyesight. (The top 3 females finished in under 5 hours!)  The nice thing about this race was you could wait in your warm car, go straight through timing chip pick up and then to the start.  So no standing in the cold.  Once we got moving I felt fine.  I warmed up very quickly.  And then it was just time to run.  For hours and hours.  I was asked by a few people before what my goal was for the race, and I didn’t have one.  I literally had no clue how long it would take or what my pace would be.  I had one goal, and that was to run the whole way.  Which I mostly accomplished.  I had to walk 3 times to get my nutrition in.  But I was ok with that.  Huntsville is some hard running.  The ground surfaces are a combo of elevated tree roots, soft deep sand and big rocks, with constant elevation changes.  Plus several icy wooden bridges.  Basically you have to watch your feet and not lose focus the entire time.  In fact the 2 times my mind started to wander and I took my eyes off the trail I kicked trees roots and almost went down.  I’m also going to lose a few toenails from those kicks. A lot of the time you aren’t really running, it’s more like hopping from spot to spot. So walking to get a gel in is safer than running and taking a tumble.  I had packed enough nutrition for about 6.5 hours I think, and I figured I would use the aid stations if I needed more.  That all worked out fine, except the Honey Stinger Waffle I had planned to eat at the end of loop one had frozen solid, so I handed that off to a nice lady to throw away for me.  At mile 27 I went for my last gel and it was a PB/Chocolate flavor which made me want to gag.  I checked all my pockets and found one more Mango Honey Stinger!  Score!  I started with 2 bottles of Gatorade Endurance and refilled one on the way.  Fair to say I vastly under-hydrated.  (Always do as Coach Jen says, and not as she does)

The first 19-ish miles of this race actually went pretty well.  I felt ok, pace was good.  And then around 19 things started to hurt, which is also usually when things start to go downhill when I run marathons.  Except instead of 7 miles left I had 12 miles left.  At that point I just focused on one foot in front of the other.  I had come through the first 11.5 mile loop in just over 2 hours, so at that point I figured if I could do the rest in under 4 I would finish in under 6 and that would be cool.  That helped to keep me moving too when I was exhausted in the last miles.  The forest became relentless and endless.  I had no idea where I was because it all looks like so much of the same and the trails cross each other at points.  I was also completely alone for the vast majority of the time. In fact the few times someone came up behind me with an “on your left” I was so startled I jumped about 3 feet!   I asked a volunteer on the course at one point if they were sure I was going the right way because I hadn’t seen anyone in ages.  (I was, the course is extremely well marked, you’d have a hard time getting lost) I did see my friends Jerry and Kristian on the out and back section so that was fun, and later I caught up with them (they were doing 50 Miles) and ran with them for a few minutes.  (Also I’m not sure how it’s possible but that out and back jeep trail was uphill both ways, and 4 inches of sand the whole way)  I saw Jenny at 2 points on the course which was great and a mental boost and Liz was out there too.  Thanks guys!!  Inexplicably at mile 29.5 my lungs started to cramp, I guess they had just done enough breathing for the day.  (Post race and next day my lungs are still sore and my breathing is wheezy)

The last 10 miles were really hard.  I was alone, cold, in pain.  Trees, rocks, sand, trees, rocks, sand.  I honestly can’t even remember what I thought about for those 2 hours, other than “watch your feet and keep moving”.  I recall talking out loud to myself a few times too.  It also seemed to get colder as the day went on, other people said the same thing.  Finally it was over, Jenny and Liz were at the finish.  I paused quickly to talk to them and then headed straight to my car to go to the shower.  I have had mild hypothermia in the past and I know I have an inability to regulate my body temp so I had tried to plan for that.  My plan had been to immediately shower and change into dry clothes.  In retrospect I should have just changed.  The shower rooms don’t have heat, so they were 0C and the water was not hot enough at all.  I was so stiff that I great struggled to get all my wet clothes off and then get other stuff on.  Which began the worst part of the whole day,  I would rather have had to run another 2 hours than repeat that post run experience.  I started to shake and shiver uncontrollably.   I got into my car with the heat set to 90 and the seat heater on and it was an hour before I stopped shaking.  It was terrible.  I was so miserable.  Everything hurt and I was so cold.  It was 2 hours of full blast heat before I started to feel normal.  (I’m so sorry to the environment for that!)

So a day later, now that’s over and I am home and warm, would I do it again, knowing how it all went down?  Honestly, I don’t know.  I am glad I did it and finished and never have to do that again.  I doubt I will ever sign up for another ultra distance race, I am in probably the worst post race shape I’ve ever been in as far how much I hurt all over.  I do think had the temperature been 20 degrees F warmer it would have been a better experience all around.

Things I would do differently if prepping for another trail race.  Even more hills.  We did hill repeats for weeks, which I was thankful for because I ran up every single hill on that course.  But I would do even more.  And I would do WAY more trail running on those technical trails.  Like I said, You aren’t really running.  You’re jumping around.  That uses totally different muscles, which mine were not prepared for.  Also just feeling fluid on the trails, I think that is something you can improve with practice.  But I think some people are just born with that ability to be a billy goat on the trails and I am not those people.  I also think a lot of people like ultra racing because you can walk a lot, and truly the longer the race the more that becomes necessary, but I don’t like to walk and I have a hard time adjusting my pace to go slower.  I just don’t have the patience for either.  So for now I will stick to road running and give my kudos to those who run far.  🙂

I am also super grateful and thankful for all those who were out there.  Strangers, volunteers, friends and the whole “That’s a horrible idea, what time?” crew.  As well as so proud of everyone who ran that day.  You guys are all rockstars!! 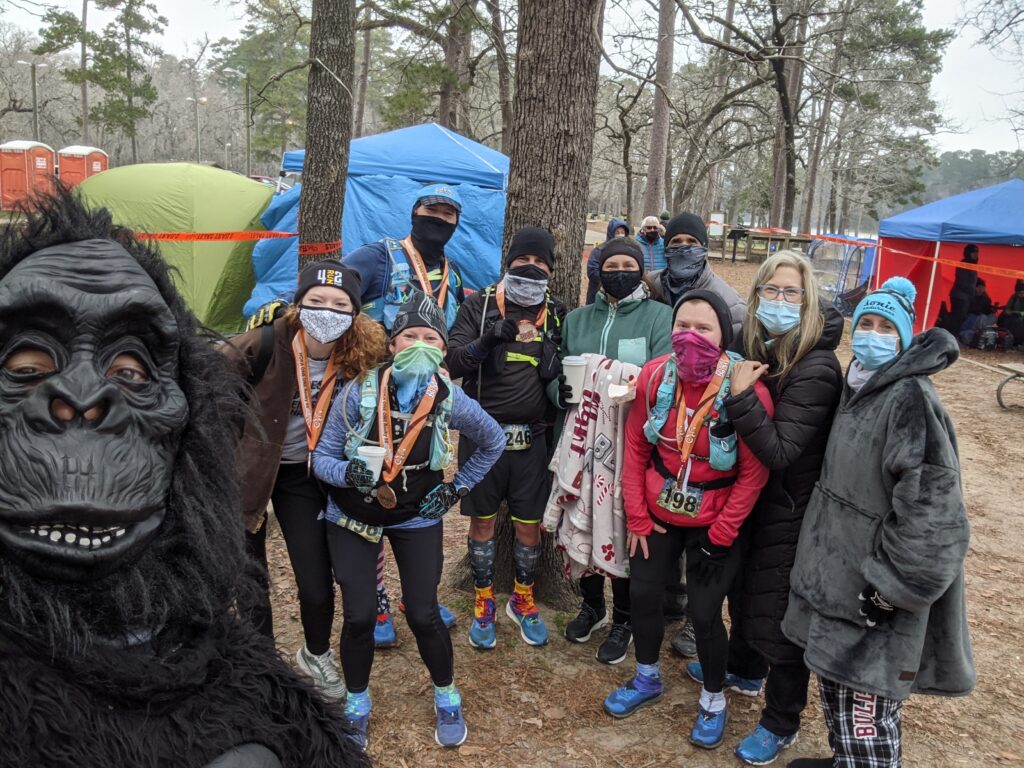